Home » Blog » What is Ceylon Cinnamon?

What is Ceylon Cinnamon?

Have you heard about ceylon cinnamon? If not, you’re not alone. I first heard about it a few years ago from my mom, who is a total health nut. Ever since then, ceylon cinnamon is my preferred spice out of the two types that you see at the store.

So what are the differences between the two cinnamons and does one have more health benefits than the other? How was it historically used and what is known about it today? You’ll read all about that here as we shine light on another one of earth’s finest native remedies: ceylon cinnamon.

Okay, so there are hundreds of types of cinnamon actually. But only 4 types are used for commercial purposes: Ceylon, Cassia, Saigon, and Korintje.

Cassia cinnamon is the most common. It is also usually the cheaper option and more commonly found at grocery stores. It normally comes from China or Indonesia and has a stronger and hotter taste. This is what you’ve probably been using since you were a kid- adding it on french toast, baked goodies, or holiday drinks. Saigon cinnamon and korintje cinnamon are varieties of cassia.

Something to note about cassia cinnamon: it contains a compound called coumarin. Ingesting large amounts of coumarin can lead to liver damage. Ceylon cinnamon doesn’t contain coumarin, which is why some people are making the switch to ceylon cinnamon. In fact, the European Union has guidelines for the maximum amount of coumarin in foods. For example, Germany advises a 132 pound adult consuming more than 2 grams of cassia cinnamon per day is at risk for liver damage.

Ceylon cinnamon is also known as “true cinnamon”. It is native to Sri Lanka, which was once called Ceylon. “Ceylon” was the name given to Sri Lanka while it was under British Control. Ceylon cinnamon has a lighter and brighter taste. It also smells AMAZING. As mentioned before, ceylon cinnamon doesn’t contain coumarin like cassia cinnamon does. In case you skimmed the last paragraph, coumarin is a compound which can lead to liver damage at high doses.

As I dive into the stories of cinnamon, I am quite impressed by this sort of mystical and highly coveted vibe that comes from its tales.

Just like many of our dear plant friends, cinnamon traces back to the Ancient Egyptian World. This remarkably wise culture used cinnamon as a perfuming agent in the embalming of mummies.

Arabs also transported cinnamon using a treacherous route to Europe. Because of this, the spice was very expensive and quite a status symbol for Europeans in the Middle Ages. Europeans found cinnamon rather effective for preserving meats during the winter. Arab merchants kept their cinnamon gold mine a secret and they made up stories about the spice’s source. One such story was that special cinnamon birds from an unknown land used the cinnamon sticks to build their nests and the Arabs knew a special trick to get the sticks down. They also told stories that poisonous snakes guarded the cinnamon source. These stories led to first century Roman Philosopher Pliny saying cinnamon came from Ethiopia. Pliny proclaimed cinnamon was carried on rafts with no oars or sails and powered by “man alone and his courage”.

Europeans then set out searching for the coveted spice, including Christopher Columbus. Columbus thought he found it in the New World and sent samples home to Queen Isabella only to find out that it actually wasn’t cinnamon.

The importance of ceylon cinnamon is now coming back into the spotlight. Here is a list of some health benefits, if you are interested.

Ideally you want to keep your blood sugar levels stable and in a healthy range. To attain this, your body needs to be sensitive to the hormone insulin. When your insulin and blood sugar get out of balance, your risk for metabolic disorders increases, particularly diabetes.

Ceylon cinnamon can help you balance your blood sugar levels. It contains a polyphenol called cinnamtannin B1. This polyphenol lowers glucose absorption and increases insulin sensitivity. Therefore, it has potential for stabilizing blood glucose levels in those with type 2 diabetes (1).

Heart disease is the leading cause of mortality in the United States. Maintaining healthy blood pressure helps prevent heart disease, stroke, and many other illnesses. Studies on rats show ceylon cinnamon reduces high blood pressure (2). It also shows reduction of the bad levels of LDL cholesterol while the good levels of HDL remain stable (3).

The heart of many diseases and issues we have as humans begins with inflammation. It is important to keep up with an anti-inflammatory lifestyle so our bodies can fight diseases and repair tissue damage. Studies show that ceylon cinnamon has potent anti-inflammatory properties (4, 5). As a result, this may lower your risk for disease.

Ceylon cinnamon is full of antioxidants. These antioxidants protect you from free radical damage and inflammation (6). The cinnamon sweeps through your system, binds to existing free radicals, and then deactivates them.

Cinnamon has been used for digestive illnesses like flatulence, nausea, appetite loss, diarrhea, and indigestion. Ceylon cinnamon, as a part of an herbal formula, relieved constipation and reduced pain and bloating in people with IBS. The tannins in cinnamon also helped reduce diarrhea (7).

Ceylon cinnamon is antibacterial. The essential oil of cinnamon fights off a wide range of harmful bacteria including Listeria and Salmonella (8, 9).

Neurodegenerative diseases, such as Parkinson’s Disease and Alzheimer’s cause a loss of the structure or function of brain cells.

Two compounds found in cinnamon appear to inhibit the buildup of a protein which is involved in Alzheimer’s Disease (10, 11, 12).

Ceylon cinnamon clearly has a rich history and a wonderful list of health benefits. If you are looking for a fun way to add more cinnamon in your diet to reap the benefits of this fine native remedy, check out Izee Native’s Ceylon Cinnamon plus black pepper. These capsules contain 600 mg of organic ceylon cinnamon with a 5 mg boost of bioperine for increased absorption. Give it a try and let us know how it has helped you on your road to better wellness! 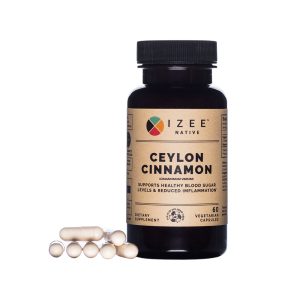